Beach Air
Log In
Get An Estimate
Request A Visit
Finance

What does SEER Rating stand for? And what does it mean?

SEER or Seasonal Energy Efficiency Ratio. … The SEER rating of a unit is the cooling output during a typical cooling-season divided by the total electric energy input during the same period. The higher the unit’s SEER rating the more energy efficient it is.

Homeowners who buy new air conditioning systems find themselves faced with a dizzying array of numbers, and they can easily miss crucial information. But with such an important system, one number deserves particular attention: SEER, or the Seasonal Energy Efficiency Ratio.

Since heating and cooling units use more energy than any other system in the home, according to the U.S. Department of Energy, the choice of SEER level makes a big difference when buying a new air conditioner.

What does SEER mean?

SEER ratings have gradually increased in recent years, so a homeowner might find great value in replacing a 10- to 15-year-old system with a more efficient, newer model. Even entry-level models now are much more efficient than standard models of decades past.

How much do A/C units with higher SEER ratings cost?

Armstrong says conventional air ducted systems can reach up to 21 SEER. Ductless and geothermal systems, which operate more efficiently, can reach into the 30s.

“You’ll need to find a point that meets your wallet limits and expectations,” he says. “There’s a direct correlation between how much you’re willing to spend up front and the SEER rating.”

How do I find my A/C unit’s SEER rating?

The ubiquitous federal EnergyGuide label can help homeowners determine a unit’s SEER rating at a glance. It will be prominently displayed, along with a range comparing it to other units, and the Department of Energy offers online energy efficiency calculators to help homeowners predict how much money they’ll save on energy costs with equipment carrying different SEER ratings.

SEER is an important indicator of energy usage, but not the only one. Check out our guide to important HVAC terms, and no matter how efficient your system is, follow our energy-saving tips to use even less power. A home energy audit can also identify ways to save energy. Your system will last longer due to decreased wear and tear, and you’ll spend less money on electricity every month. 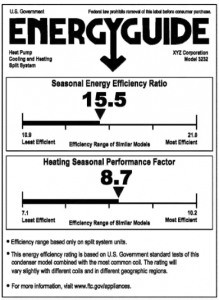